At OMLpatches.com we have lots of experience creating patches.  One of our main patch creations is for police departments, swat teams or any type of sub teams that can wear patches.    For many police departments, they are changing uniform styles and are not able to find patches that use camo backgrounds.  We can do this no problem and subdue the design to match the background.  Of course if we are going to duplicate a police patch that is in service and is used, we will need to have some ID and a letter from the department giving us permission to reproduce the patch.

Some police departments want special team patches for their swat teams or sub teams.  We do quite a few of those as well, because we have no minimums to order.  If you only need to order 4 for a special team's use, we can do that no problem.  You don't have to order 10 or 50, just simply order 4.  We have found that the team templates are a huge success for swat teams or any small teams that want to be identified as separate from the other teams - more of an elite team maybe?  We have also found that the Team Templates are extremely popular for this type of group.  Why?  because its easy and fast to order.  We have seen many patches that have SWAT at the top and then the department or the name of the team at the bottom - and the teams love their patches.   By far, the most popular SWAT team patch is the punisher team patch  or the punisher with red eyes team template patches.    They look great no matter what writing you have on them. 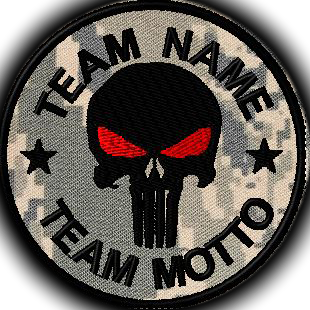 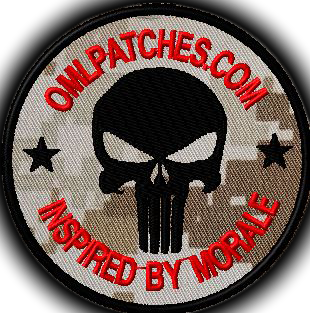 The patches are priced affordably - only $12.99 per patch with no extra fees, no set up fees and no digitizing fees.  All you have to do is add your own lettering and voila you have an amazing team patch.   Its easy enough to do that you can set up a small team and have them recognized and identified as  part of that team.  Team morale makes a big differents - so boost your SWAT team's morale today and get them some custom team template patches.  They will thank you for it.

(we have also seen that team template patches are so affordable that you can make a joke patch for one of your SWAT team members - how about the writing in pink or their favorit saying instead of the team motto?  they can end up pretty funny!)

Another patch that stands out from the rest of the patches is the Jolly Roger Team Template Patch.  Its a perfect size - standard 2 x 3 and has the Jolly Roger logo on it and room for the team name and the team motto.  Looks great with any camo background. 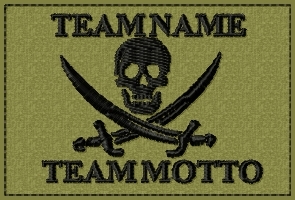 We are glad that police patches are so popular from OMLpatches.com - we understand how patches boost morale and how team patches brings the team up to another level - whether its Police or a SWAT team or smaller sub-teams - everyone can use a morale boost once in a while.

Get your team patches - your team will thank you!