Can you make a patch smaller?

We get questions like this quite a bit.  Here is a good example:

"I really like the Reaper patch, but I want it to fit on a 2 x 3 patch for my tactical hat.  Can you do this?"

While it really depends on the design, the example above has a NO answer. Why?  becuase the Reaper design has too much detail to make it smaller.  We have made patches smaller - for example the ever popular Jolly Roger design.  It is a more simple design with not a lot of detail.  When you make patches smaller, the thread size stays the same, and the spaces between the stitches or stitch blocks gets smaller.  Hopefully that makes sense - its not like digital printing where you can just add less color or make things smaller when your resize - we can only go as small as the width of the thread, and thread is pretty thin indeed.

To understand a bit more - think of it the other way in digital print.  If you have a photograph that was taken on your phone, you can't take that picture and blow it up to a huge picture - it doesn't work and the picture gets blurry because all of the details just can't be blown up.  Same for the embroidery - you can't cram in a lot of detail and expect it to show up properly - the threads will simply be on top of each other and create a big mess.

Let me show you with the example above - custom team patch Reaper.  Here it is in stitches from my embroidery desktop: 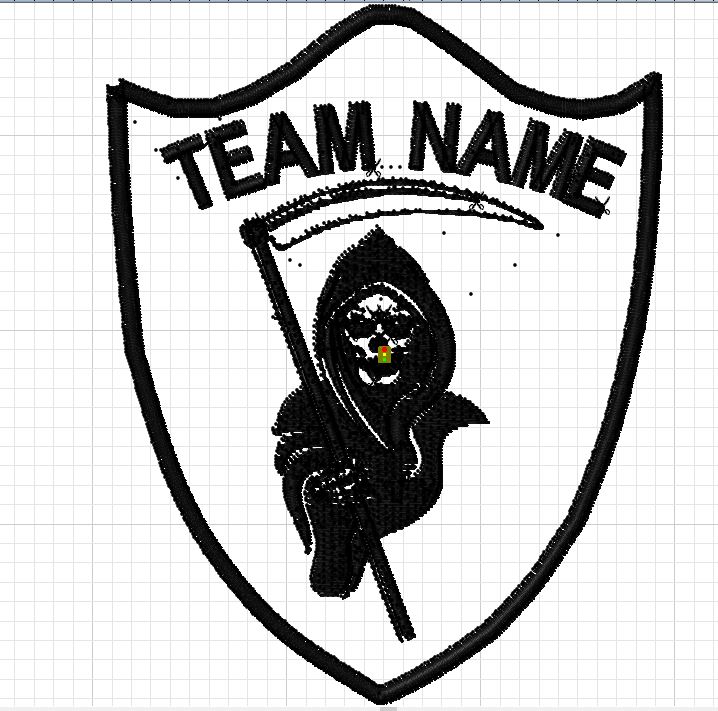 You can see the details in the reaper all around in his skull and in his cape as well.

Here it is a bit closer up so you can see the details: 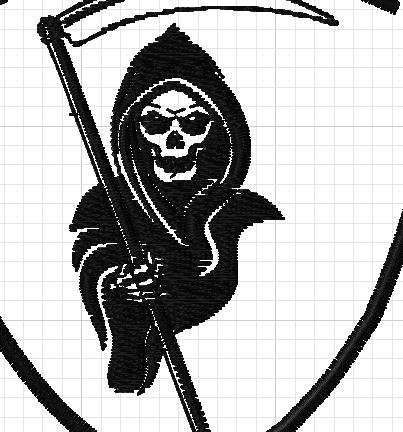 Reaper has a lot of details, and many of them are the spacing between the elements that help make the design, for example in his cape - the details of the spacing show a flowing cape - it would not be the same if it was just one solid embroidery element.

So what if we take the Reaper out of the shield patch and then put him on a much smaller 2 x 3 patch?

Well, the reaper is much too big for the 2 x 3 patch, as show below: 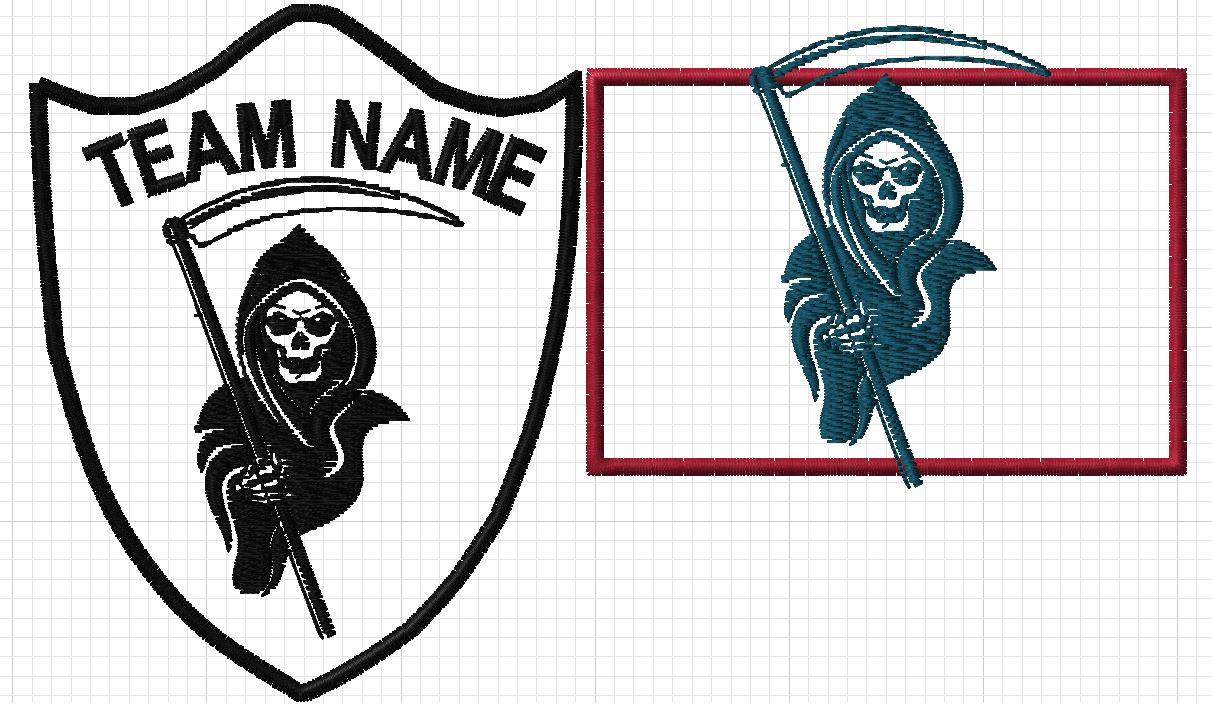 To add the reaper on to the smaller 2x3 patch, we need to make the reaper quite a bit smaller.  This customer also wanted some writing above and below the reaper, so that means that the reaper has to be even smaller than just fitting into the patch.  So lets make the reaper smaller, and make it small enough to fit into the 2x3 with lettering. 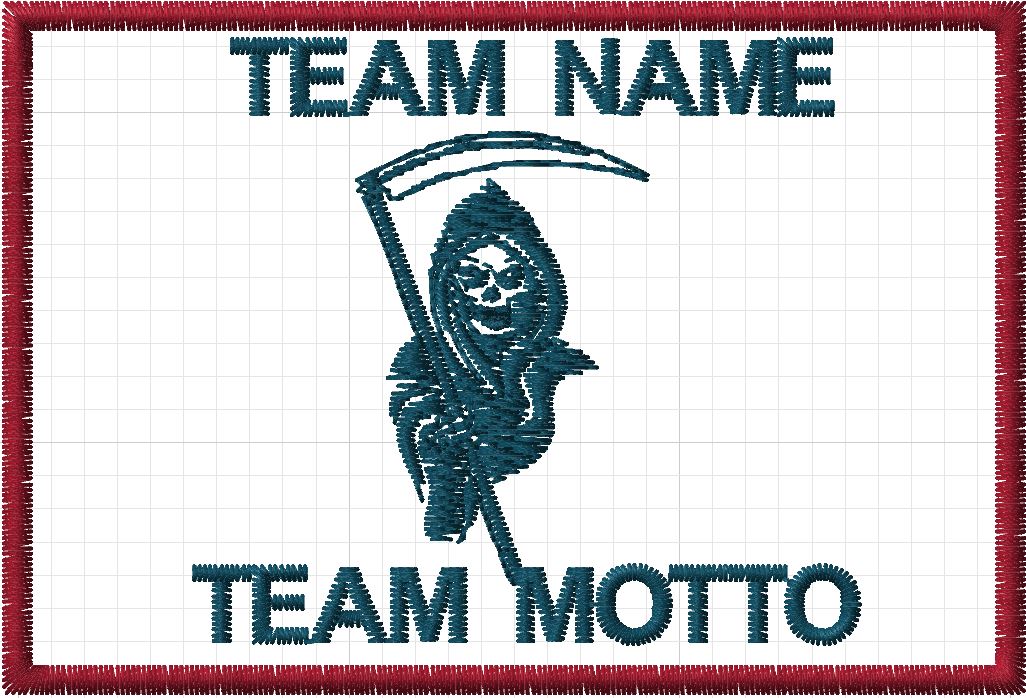 The reaper has lost quite a bit of his details and his face doesn't look good anymore.  Lets look at him a bit closer and you can really see how much detail he has lost: 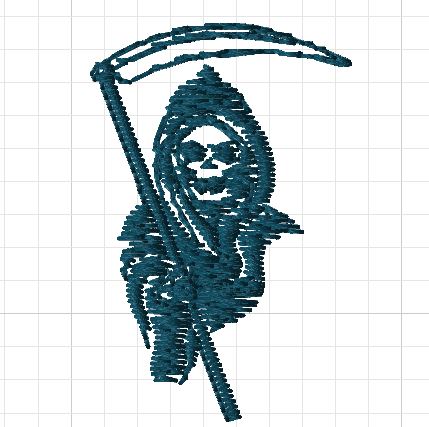 The reaper kind of looks like a kids drawing up close - there are not enough stitch lines to make his cape look good anymore and we have lost quite a bit of the definition in the design in general.  Look at the face - you can tell that it is a reaper, but he has lost the details of the face - he just has blobs for the eyes and mouth!

So as an answer, we will say that YES SOMETIMES we can make a patch smaller and it will work out, but NO SOMETIMES we can't.  If we can do it and it looks good, we will do it for you.  But if it ends up looking like reaper, then no - it looks awful.

If you are not sure that it will work, CONTACT US with your idea and we will let you know.