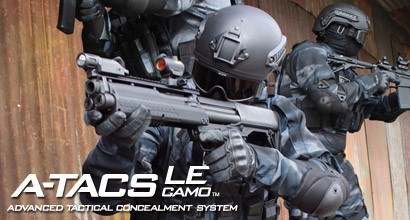 "As the name indicates, new A-TACS LE Camo was developed for Law Enforcement professionals. The pattern combines various shades of grey, blue and black and utilizes the trademark “organic pixel” look developed by DCS for its original A-TACS AU Camo pattern. A-TACS LE also incorporates variable angles and urban forms derived from photography and effectively utilizes an even blend of light and shadow to create unique pattern with a slight horizontal flow. Additionally, A-TACS LE Camo was developed to work with variable combinations of black or blue nylon gear and other equipment allowing municipalities and departments the option to easily upgrade their kit on an “as needed” basis, gradually phasing in new items while still maintaining a cohesive and uniform appearance."

This new camo fabric is simply AWESOME!  It is a very dark fabric, that will look awesome with quite a few thread colors on it, and will certainly make awesome velcro patches.  As it states above, this fabric was designed for law enforcement, so the colors that they wear are in the fabric - its dark navy blue, dark greys and of course black.  It is a multi blended colored fabric, and you  really have to look at it in a good light to see all of the color nuances that are going on.  Some parts look really blue but at the same time, some parts are black - but the whole design is relatively dark.   We think that they will make awesome black out patches, too!  There is enough color in them to be seen, but then again its dark enough for the extreme subdued black out to be in effect.

Even though this fabric was designed specifically for law enforcement, anyone can use it to make patches!!  It will be even better for law enforcement that are wearing ATACS LE uniforms and gear, finally their patches will match exactly and look amazing!

We have not decided on a "standard" thread color for ATACS LE velcro patches.